After weeks of puppet work, figuring out how to properly hold a battle-axe, and re-learning 90’s teen-cheer dance battle moves, we’re ready for other people to join the fun. Tonight we open.

Audiences, as you find your way to this blog, we invite you to check out the RESOURCES tab, above. There you’ll find more info on items explored in the program notes.

For those who haven’t booked your tickets yet, how will you find out what the rest of this 5-headed monster looks like?

D&D brings your spells from playful to patricide!

Click on either image to see the full comic.

AGNES tosses away her sword and shield. She begins applying some lipstick.

AGNES: Enough with all this dorky stuff. You really think you’re badasses? Then let’s finish this . . . Cheerleader style

She sticks out her hands as Kaliope and Orcus put pom-poms into them.

Our actors are having a lot of fun choreographing this dance battle. Choreographer Ara Glenn-Johanson has collected an impressive selection of 80s/90s dance moves: the Maniac; the Crump; the Vogue; the Macarena.

Here are some video references for your nostagianjoyment.

That was your head! 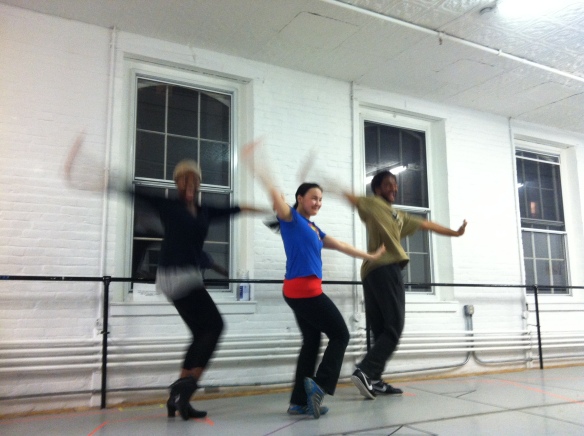 (Shira wants it known that she loves Madonna).

Lights come up on TILLY EVANS, a teenage girl decked out in full leathery D&D fantasy armor with a cool- ass sword in hand. She is surrounded by a horde of Kobalds (goblin-like creatures).

TILLY quickly slays each of the monsters with grace and efficiency. 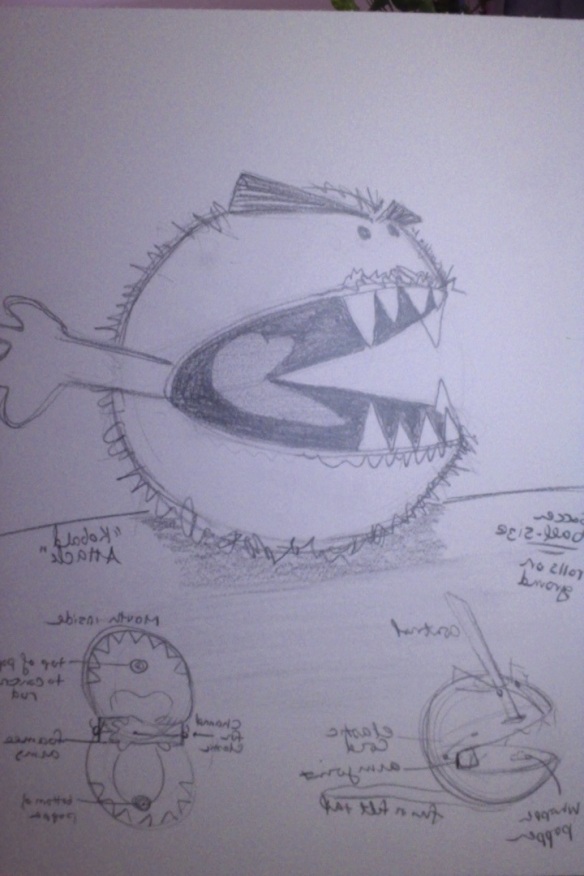 Intense puppeturgy going on in rehearsal today; while working on movement for the Kobalds that attack Tilly in the first scene, fight director Robert Najarian pulled an epic point of reference for their bouncing. The Gummi Bears. Enjoy.

Trailer for a new D&D-based movie that was just released at South by Southwest, ZERO CHARISMA. Game masters take note!

Shira found this awesome article from the Atlantic on adolescent women and the need to escape into fantasy. Click the image to read more online!

The salient fact of an adolescent girl’s existence is her need for a secret emotional life—one that she slips into during her sulks and silences, during her endless hours alone in her room, or even just when she’s gazing out the classroom window while all of Modern European History, or the niceties of the passé composé, sluice past her.

Bella’s inner fantasies turned real in TWILIGHT have entranced a generation of readers – what does this say about pubescent girls at large?

AGNES: Tilly, shoot them with a magic missile.

AGNES: What do you mean you can’t?

TILLY: I forgot the spell.

AGNES: What do you mean you forgot the spell?

TILLY: It’s a thing. It’s not going to help us.

Click the above image of RHIALTO THE MARVELLOUS to read an informative blog post from The Evil GM on Jack Vance’s influence on D&D’s magic system (Vancian magic.) The basic theory behind this is that a wizard’s spells are so complex (s)he can only keep them in his/her memory until (s)he uses them, after which the spells are completely forgotten and must be re-learned. It is, indeed, a thing.

Also, the song “The Dying Earth” by the band “Wizard Eye.” Also a thing.

LILITH: Tillius, as always you have my blade.

KALIOPE: Why are you dressed so strangely?

AGNES: I’M dressed strangely? You do know you look like a Thundercat, right?

THUNDERCATS! Thundercats is an American-made Sci-Fi/Fantasy/Adventure/Alien Cat show that ran for four seasons from 1985-1989. This show’s got everything: Mummy Cats! Cats with Swords! Snarf Cats! Thunder Cats!

Most likely, Agnes is referring to the official Thundercats sex symbol, Cheetara. You can read more about her on the Thundercats Wiki (which exists).

Cheetara is ready for battle!

Hansen, Usher and other VH1-worthy celebs crush on Cheetara on the above episode of I LOVE THE 80s STRIKES BACK (27:21)

Hello fellow monsters! Your friendly neighborhood DM Biggs here, and in honor of our fantastic evening of role playing the other evening, I wanted to share this skit with you… Whoa whoa whoa significant others, not THAT kind of roleplaying, THIS kind of roleplaying.

Yep, that pretty much sums up what playing Dungeons and Dragons is like with a bunch of high school aged boys, I can almost taste the entire two liters of Mountain Dew I would have drunk while playing with my buddies! Good times…

Until next time!
DM Biggs
aka Mike